A Time trial is a race against the clock on open roads. Riders are set off at 1 minute intervals and the fastest rider to complete the course is the winner. The standard distances for time trilas are 10,25, 50 and 100 miles. Longer time trials involve covering the greatest distance possible in a set time, either 12 hours or 24 hours. Some time trials, generally on hilly courses, are run over non-standard short-medium distances. Certain time trials are ridden in teams of 2-4 riders, most commonly in teams of two (known as '2-up' time trial). 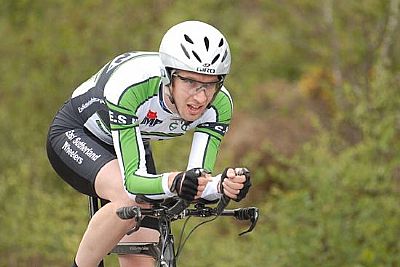 To participate in 'Club Confined' Time Trials you must hold a British Cycling membership and be registered as East Sutherland Wheelers as first club.If you are new to this and would like to try it, please contact Race coordinator.

Due to insurance issues the club 10TT will be club confined events. Non members are allowed to take part in a couple of these events to try them with a view to joining the club. Please read the British Cycling Policy below
British Cycling Policy on Club Confined Time Trials in Scotland
British Cycling has an agreement with Scottish Cycling to allow 'club confined time trials' to be covered by the club's liability insurance as a training activity. 'Club confined time trials' should involve no more than 25 riders, cover a distance of no more than 25 miles and be confined to club members plus any invitees who are not members of any cycling club and who have been invited to participate with a view to joining that club.

This cover is provided as a benefit to clubs and officials, not to individual participants. Therefore individual participants are strongly urged to obtain an adequate level of personal liability insurance such as that provided by Silver or Gold membership of British Cycling.
Conditions
Where any of these conditions are not met, the event is no longer considered to be a 'club confined time trial' and must therefore be registered with Scottish Cycling as an Open Time Trial for which the normal registration fees and levies are payable.